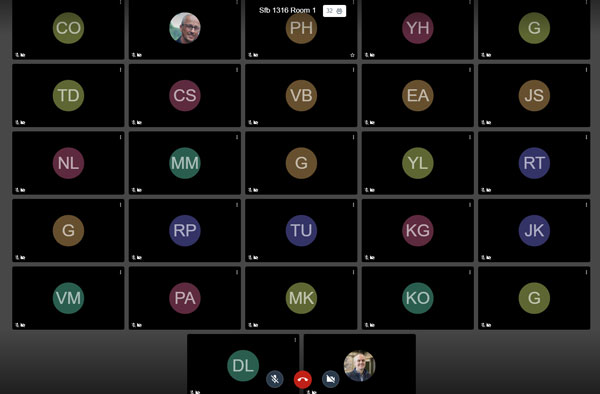 As the current COVID-19 situation has changed the everyday worklife, also the SFB's meeting routine is being adapted. The next Project Area Meeting for both project areas A and B had been planned to be an on-site meeting in Berlin is now changed into a virtual meeting on April 1st and 2nd.

To allow a smooth meeting, the system has been tested during this week and best practice rules for virtual meetings have been set up. This should allow all projects to present and discuss their recent work despite working from home. As virtual meeting are often found to be more exhausting than on-site meetings and harder to focus on over long periods of time, the presentation time has been changes to 15 minutes with an additional 5 minute discussion. 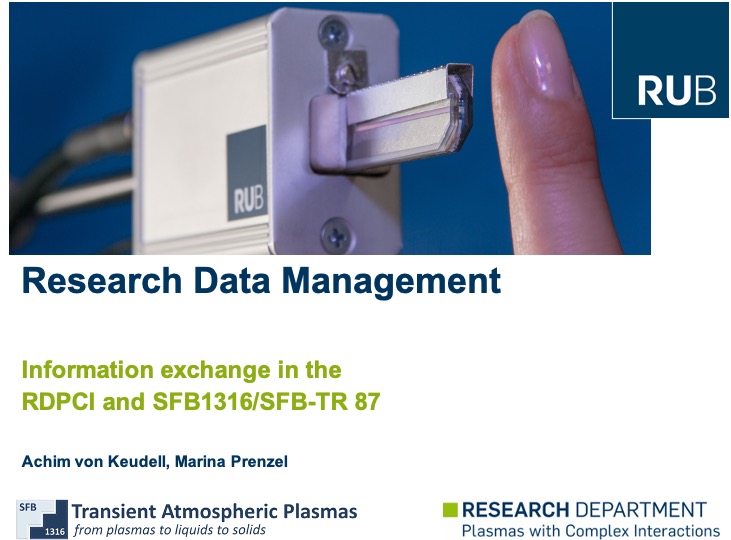 On March 2nd, the SFB 1316 together with the SFB-TR 87 and RDPCI hosted an information event on the implementation of a Research Data Policy for the research groups.

A Research Data Repository of the RD Plasma is currently developed in corporation with the INP Greifswald.

In addition, the participation in the joint project „Quality assurance and networking of research data in plasma technology – QPTDat” (German title:„Qualitätssicherung und Vernetzung von Forschungsdaten in der Plasmatechnologie – QPTDat"), which is funded by the BMBF, should improve the research data management and help to implement standard structures.

A research team from Bochum has developed a new method to drive catalytically active enzymes.

Compared with traditional chemical methods, enzyme catalysis has numerous advantages. But it also has weaknesses. Some enzymes are not very stable. Enzymes that convert hydrogen peroxide are even inactivated by high concentrations of the substrate. A research team at Ruhr-Universität Bochum (RUB), together with international partners, has developed a process in which the starting material, i.e. hydrogen peroxide, is fed to the biocatalysts in a controlled manner using plasma. The enzymes themselves are protected from harmful components of the plasma by a buffer layer. Using two model enzymes, the team showed that the process works, as reported in the journal “ChemSusChem” from 5 February 2020.

In biocatalysis, chemicals are produced by cells or their components, in particular by enzymes. Biocatalysis has many advantages over traditional chemical processes: the reaction conditions are usually much milder, energy consumption is lower and less toxic waste is produced. The high specificity of enzymes also means that fewer side reactions occur. Moreover, some fine chemicals can only be synthesised by biocatalysis.

The weak spot of enzyme biocatalysis is the low stability of some enzymes. “Since the enzyme often has to be replaced in such cases – which is expensive – it is extremely important to increase the stability under production conditions,” explains lead author Abdulkadir Yayci from the Chair of Applied Microbiology headed by Professor Julia Bandow.

The research team has been studying two similar classes of enzymes: peroxidases and peroxygenases. Both use hydrogen peroxide as a starting material for oxidations. The crucial problem is that hydrogen peroxide is absolutely necessary for activity, but in higher concentrations it leads to a loss of activity of the enzymes. As far as these enzyme classes are concerned, it is therefore vital to supply hydrogen peroxide in precise doses.

To this end, the researchers investigated plasmas as a source of hydrogen peroxide. Plasma describes the fourth state of matter that is created when energy is added to a gas. If liquids are treated with plasmas, a large number of reactive oxygen and nitrogen species are formed, some of which then react to form long-lived hydrogen peroxide, which can be used for biocatalysis.

In an experiment in which horseradish peroxidase served as one of the model enzymes, the team showed that this system works in principle. At the same time, the researchers identified the weak points of plasma treatment: “Plasma treatment also directly attacks and inactivates the enzymes, most likely through the highly reactive, short-lived species in the plasma-treated liquid,” outlines Abdulkadir Yayci. The research group improved the reaction conditions by binding the enzyme to an inert carrier material. This creates a buffer zone above the enzyme in which the highly reactive plasma species can react without harming the enzyme.

The researchers then tested their approach using a second enzyme, the unspecific peroxygenase from the fungus Agrocybe aegerita. This peroxygenase has the ability to oxidise a large number of substrates in a highly selective way. “We successfully demonstrated that this specificity is maintained even under plasma treatment and that highly selective biocatalytic reactions are possible using plasma,” concludes Julia Bandow. 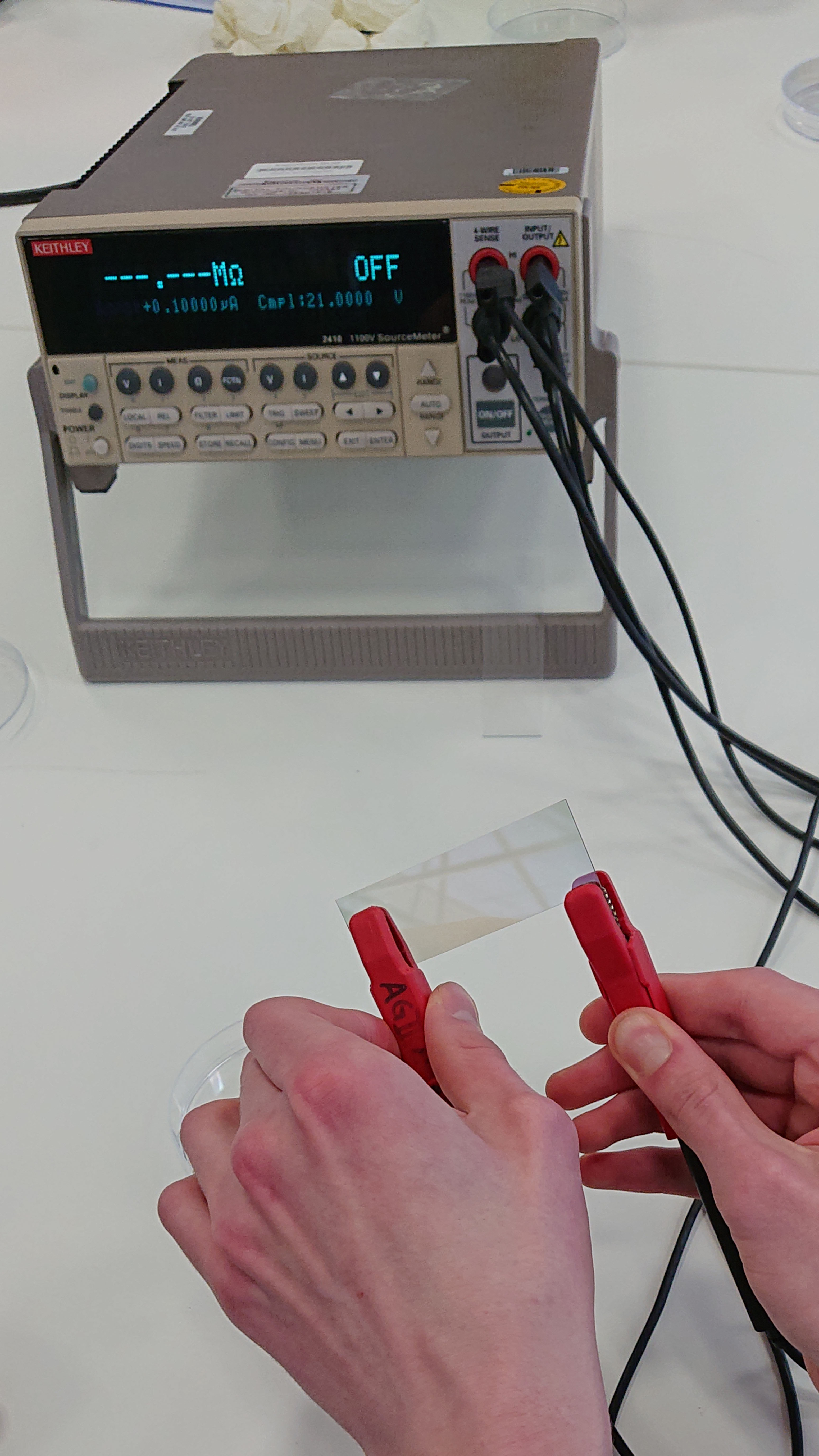 87 and CRC 1316 joined the workshop program of the Bo.Ing 2020. At the Bochum engineering forum "BO.Ing", pupils are given an insight into the engineering sciences in workshops, laboratory tours and discussion groups. The event is organised by the zdi network IST.Bochum.NRW and is implemented in cooperation with universities from Bochum and the surrounding area. Sixteen pupils attended two different workshops and learned the basic ideas about plasma and its applcation. In hands-on activities, the girls and boys were able to perform their own experiments. 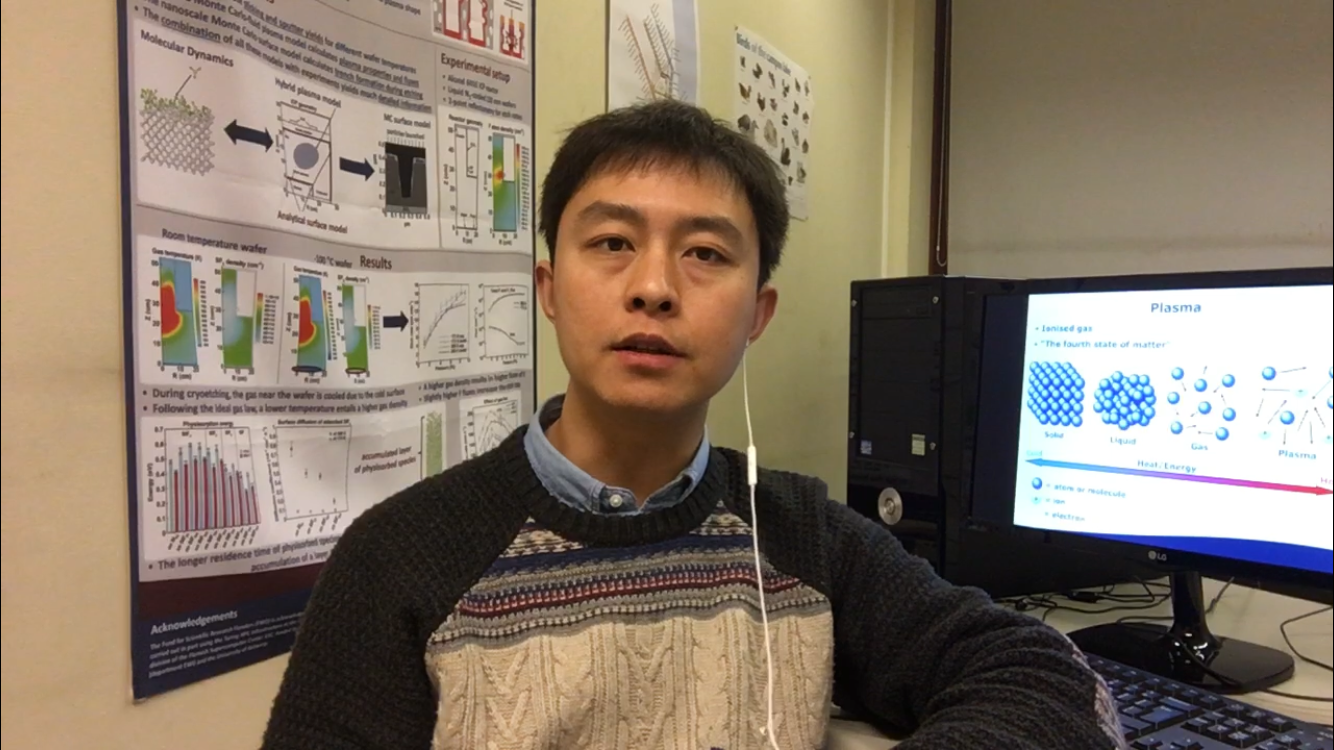 Dr. Quan-Zhi Zhang from Dalian University of Technology in China joined the CRC 1316 as new Mercator Fellow. He is very experienced in Particle-in-cell/Monte Carlo collision (PIC/MCC) algorithms, and the simulations of plasma and plasma-surface interactions, for various applications. His research activities include the heating mechanisms and electron kinetics in dc/rf, pulse modulated, dual-frequency (EAE) capacitively coupled plasma; cryogenic plasma etching of porous materials; the propagation mechanism of plasma streamer in Dielectric Barrier Discharge, structure catalysts (like honeycomb) at atmospheric pressure.

Bruno Cailler and Juslan Lo visited the research group EP2 in Bochum from April 1st to April 5th, 2019. Both scientists are working at the Non equilirbium plasma diagnostics laboratory (Diagnostics des Plasmas Hors Equilibre or DPHE) at the  INU Champollion in Albi. Juslan Lo is associate professeor and Bruno Caillier is professor.

Juslan Lo received his Master’s Degree in Electrical Engineering and Automation from the Institut National Polytechnique of Toulouse in 2008 and PhD in Plasma Physics and Engineering from Université de Toulouse III in 2012. His main interests include interactions between plasma discharges, electromagnetic waves and biological substrate. During his PhD., he took interest in reconfigurable plasma-based photonic crystals and metamaterials, specially within microwave range frequencies. He joined INU Champollion in 2015 where he currently holds the position of Associate Professor. His current interest is the coupling between high frequency waves and plasma discharges in order to obtain favorable conditions for target species generation for environmental and medical purposes. His visit to Dr. Achim von Keudell's laboratory in University of Bochum was motivated by different experimental plasma characterization setups used in University of Bochum. He is interested in characterizing plasma discharges used in his work.

Bruno Caillier is working on non equilibrium plasmas at low pressure and atmospheric pressure, his interests are DBD lamp, phosphores excited by plasma, surface treatment and optical diagnostics. Heis currently working on setting up a monochromator, he is reprogramming the software to control its displacement, set the parameters and acquire the signal. He is also working on the characterization of a DBD plasma lamp (fed with Argon and Krypton) as a UV photon source based on phosphores deposited on the wall of the lamp and excited by plasma. He is also working on international projects in collaboration: University of Sao Paulo in Brazil with the group nano (Grupo de Nanomateriais e Sistemas Luminescentes), CAPES-COFECUB (2020-2024): Plasma synthesis of gold nanoparticles to study the process of energy transfer from excited lanthanides in the infrared in order to search for powerful photo-thermal effects for the development of nanothermometers; with Universidade de Araraquara (UNIARA) in Brazil: Treatment of edible bacterial cellulose with an Aura ECR source, modification of surface properties, adhesion and decontamination. Polymer plasma treatment for cell growth, adhesion modification; with the University of Oran (USTO) in Algeria: Experimental studies of DBD lamp as a UV photon source, thesis in co-supervision with the University of Oran (USTO); with the LGTex laboratory, in Tunisia: Treatment of textile by plasma processes. 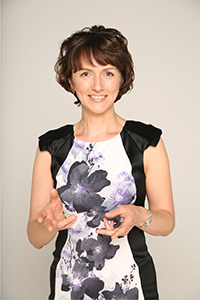 Dr. Svetlana Starikovskaia form the LPP lab at the Ecole Polytechnique in Paris joined the CRC 1316 as new Mercator Fellow. She is an expert in low temperature plasma, pulsed nanosecond discharges, kinetics of chemically active nonequilibrium media, energy distribution in the discharge, excitation of internal degrees of freedom, combustion initiation and support by nonequilibrium plasma. 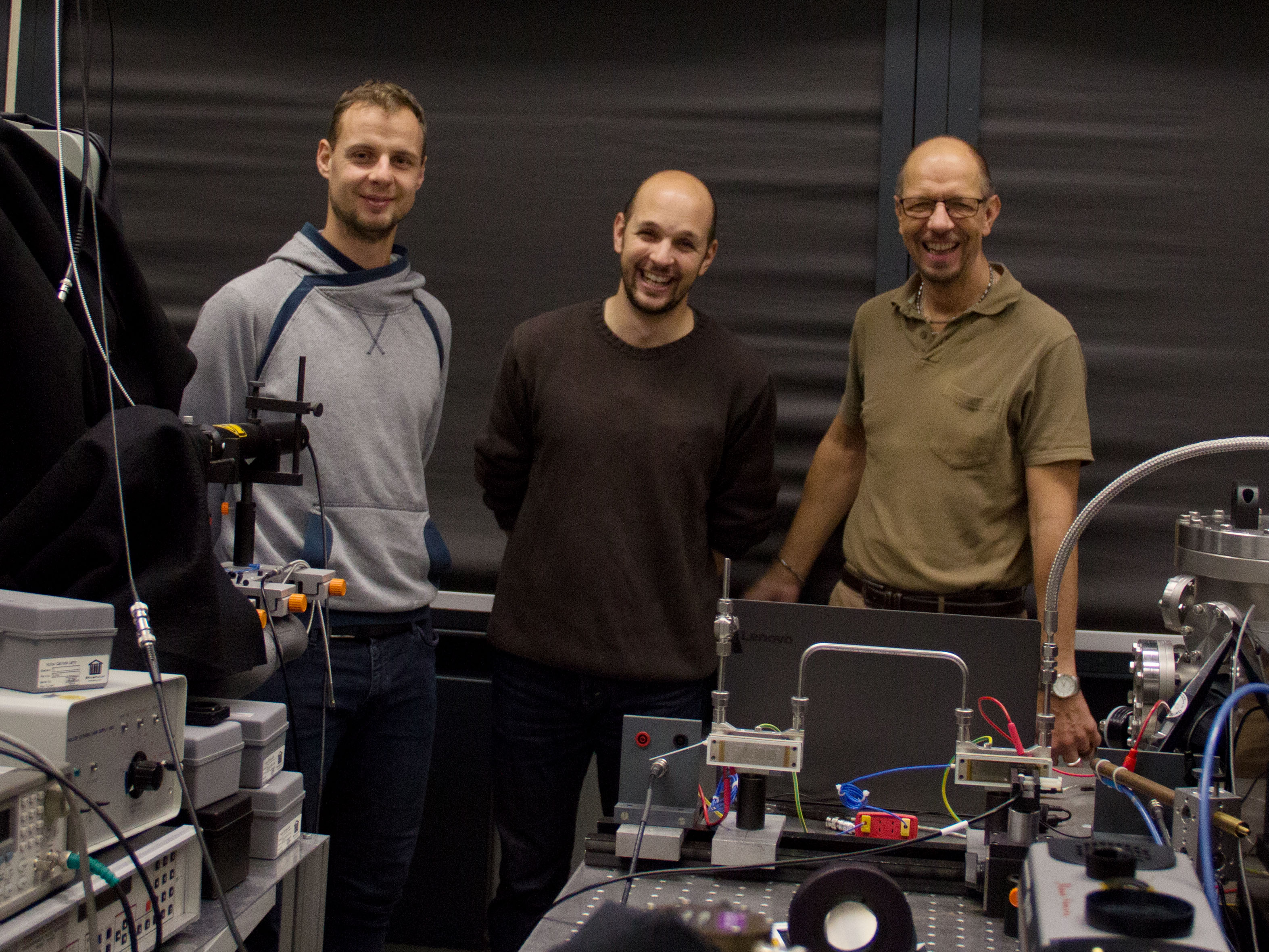 Dr. Sylvain Iséni stayed from October 21st until October 31st, 2019, in the group of Prof. Achim von Keudell. His visit is part of the collaboration with his home institute, GREMI, espacially, Prof. Remi Dussart. Particularly, the focus of the recent visit is are eletric field measurements by optical emission spectroscopy in the project A6 (Dr. Volker Schulz-von der Gathen, Sebastian Dzikowski) of the CRC1316. In the project micro cavity arrays are investigated.

Furthermore, Dr. Iséni used the chance to participate in the online seminar and had a talk with the title "Temperate micro-plasmas for environmental purposes: sources, properties, cross-diagnostics & challenges".

On Oktober 25th, 2019, Dr. Emile Carbone from the Max-Planck institute for plasma physics in Garching, Germany, is going to visit the research group of Prof. Czarnetzki. Dr. Carbone is research group leader of the group Plasma for Gas Conversion and is invited to the Ruhr-Universität Bochum in the framework of the CRC 1316. Moreover, he is going to have a seminar talk at experimental physics V about "CO2 dissociation by microwave plasmas: prospects and challenges" at 10:15 in NB 5/158. Everyone who is interested is welcome to join!