Extreme Conditions in Plasma in Liquids

Nanosecond plasmas in liquids play an important role in the field of decontamination, electrolysis or plasma medicine. The understanding of these very dynamic plasmas requires information about the temporal variation of species densities and temperatures. This is analyzed by monitoring nanosecond plasmas that are generated by high voltages (HV) between 14 kV and 26 kV and pulse lengths of 10 ns applied to a tungsten tip with 50 µm diameter immersed in water. Ignition of the plasma causes the formation of a cavitation bubble that is monitored by shadowgraphy to measure the dynamic of the created bubble and the sound speed of the emitted acoustic waves surrounding this tungsten tip.

The temporal evolution of the bubble size is compared with cavitation theory yielding good agreement for an initial bubble radius of 25 µm with an initial pressure of GPa at a temperature of 1200 K for a high voltage of 18 kV. This yields an initial energy in the range of a few 10-5 J that varies with the applied high voltage. The dissipated energy by the plasma drives the adiabatic expansion of water vapor inside the bubble from its initial supercritical state to a low pressure, low temperature state at maximum bubble expansion reaching values of 10^3 Pa and 50 K, respectively. These predictions from cavitation theory are corroborated by optical emission spectroscopy (OES). After igniting the nanosecond plasma, the electrical power oscillates in the feed line between HV pulser and plasma chamber with a ring down time of the order of 60 ns. These reflected pulses re-ignite a plasma inside the expanding bubble periodically. Broadband emission due to recombination and Bremsstrahlung becomes visible within the first 100 ns. At later times, line emission dominates. Stark broadening of the spectral lines of H_alpha (656\,nm) and OI (777\,nm) is evaluated to determine both the electron density and the electron temperature in these re-ignited plasmas. 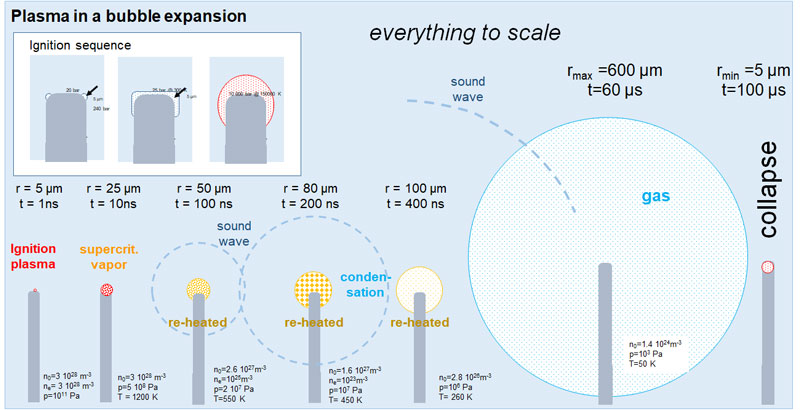 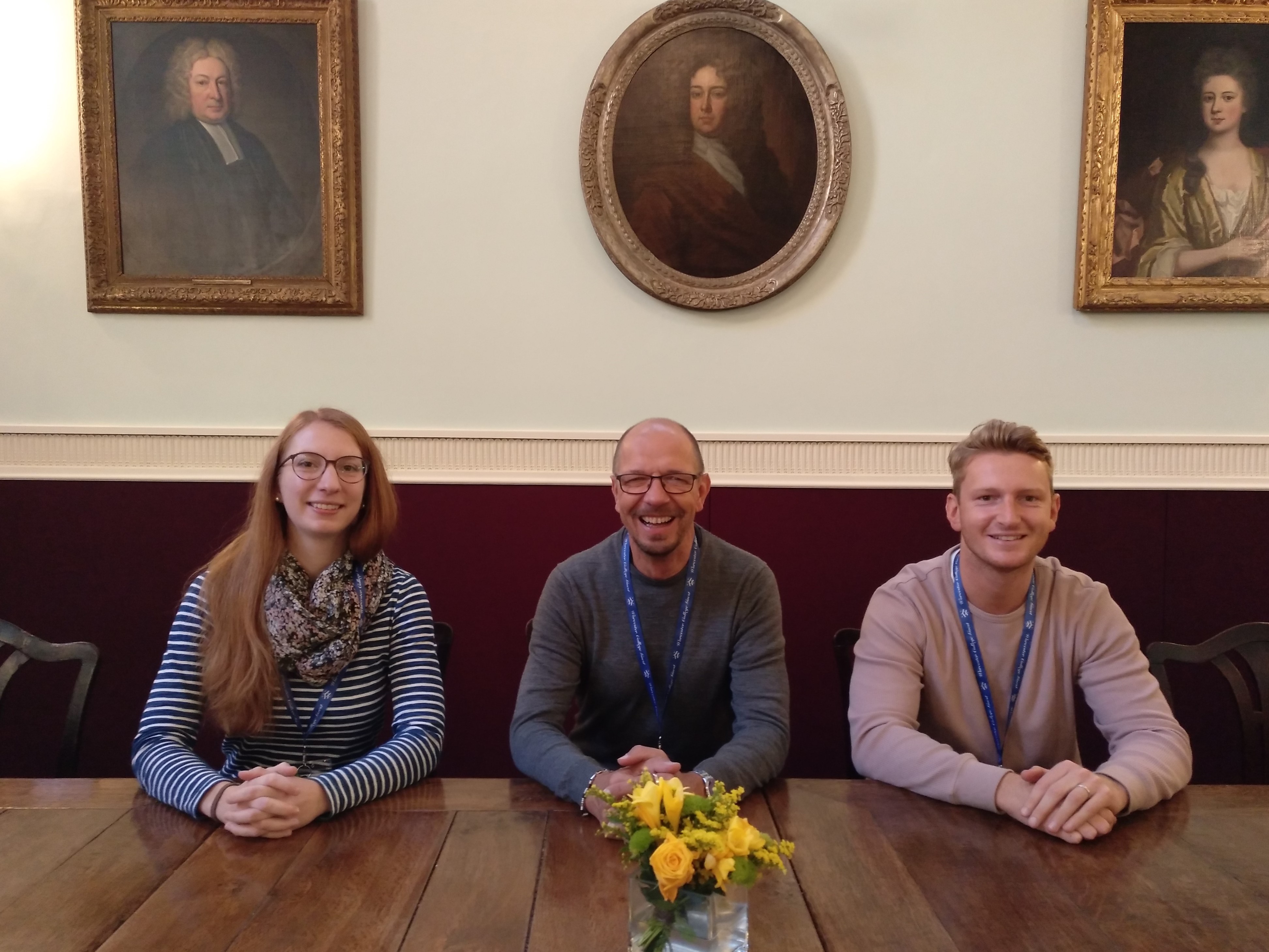 First results on the non-equilibrium excitation and dissociation of CO2 in an atmospheric pressure helium RF plasma jet. The objective of the project A3 in the SFB 1316 and the BMBF project Carbon2Chem is the separation of plasma and surface chemistry studied for the example of CO2 plasma excitation admixed to the noble gas within the plasma jet. This method offers the possibility to control the gas temperature of the feed gas as well as the molecule excitation by low energy electrons or by Penning collisions with the excited noble gas atoms or dimers. The plasma jet is driven with varying absorbed plasma power and admixture levels of CO2 . The excitation of CO2 is monitored by in-situ set-up of Fourier-Transform Infrared Spectroscopy. Concetrations of CO2 and the produced CO are analysed. Furthermore, the vibrational and rotational temperatures of the possible degrees of freedom of the measured molecules are determined.

The gas feed of the atmospheric pressure plasma jet was helium, because of the large mass difference and, there- fore, poor momentum transfer to CO2. This results in the smallest collisional quenching of all noble gases. The plane parallel plasma jet is driven with RF. These kind of plasma source is already very well investigated in respect to their plasma physics and chemistry for different gas mixtures of noble gases and molecules.

The main result of this work is the clear non-equilibrium excitation of CO2 and CO. In detail, the rotational tem- perature of CO is below 400 K and, in contrast to this, the vibrational temperature reached values up to 1600 K, and the temperature of the excitation of the asymmetric vibration of CO2 is about 700 K. The impact of variable plasma power and admixture of CO2 to the He gas flow is rather weak. It is assumed that the vibrational and rotational excitation of CO mainly originates from the dis- sociation reaction either by direct electron impact of CO2 or by Penning dissociation between CO2 and excited helium metastables. From this electronic energy transfer to CO2, highly vibrational excited CO molecules are pro duced by dissociation.

The non-equilibrium is due to the nature of excitation of molecules by collisions with electrons with energies larger than 7 eV at the oscillating sheath edges and Penning collisions with excited heilum atoms. The low rotational gas temperature is explained by the helium plasma gas which acts as a buffer.

This non-equilibrium character offers more investigations within the field of plasma catalysis, through which the reaction rate of a desired catalytic reaction is supported. Moreover, it is important to ensure the en- hancement of the reaction rate through the impact of excited molecules and not due to an unintentional heating of the catalyst surface by the plasma itself.

In the future, the experiments will be extended to other gas mixtures and the impact of catalytically active surfaces will be explored.

Non-equilibrium processes are the basis of a multitude of phenomena in nature such as transport, excitation of atoms and molecules and de-excitation and dissipation at surfaces. The non-equilibrium character of plasmas is especially pronounced due to the high energy density in these systems and the very selective excitation of, for example, only the electrons. If these plasmas are brought into contact with solids or liquids, the non-equilibrium character can be transferred to other states of matter. An excellent example are plasma chemistry processes that are directly coupled to catalytically active surfaces. 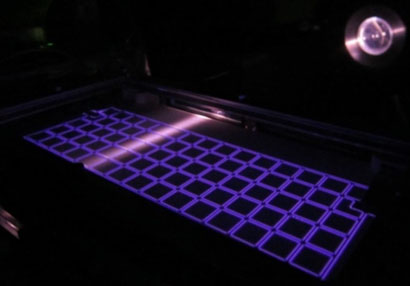 The use of non-equilibrium atmospheric pressure plasmas is most interesting since they can most easily be combined with standard chemical processes. The non-equilibrium character of these plasmas can be controlled by large gas flows or by short pulsed excitation assuring strong cooling mechanisms. Thereby, a huge variety of desired plasma chemistries or emission patterns can be adjusted following an empirical strategy. However, any further progress is hampered by the lack of a fundamental understanding of those discharges and their interaction with fluid and solid Interfaces.

The Collaborative Research Centre (CRC) 1316 “Transient atmospheric plasmas – from plasmas to liquids to solids” addresses these research questions by combining expertise in plasma physics, surface physics, chemistry, biotechnology, and engineering. This CRC focuses on transient atmospheric plasmas at varying spatial and temporal scales for the nanostructuring and activation of catalytic surfaces, for the coupling to catalysis and biocatalysis, as well as for electrochemical processes. Due to the strong interaction between these plasmas and the confining interfaces, special in-situ, real-time, and in-operando methods will be employed. The research program follows three consecutive phases with reaching a basic understanding at the beginning to the optimum integration of plasma and active surface, until the up-scaling of these plasmas. The CRC 1316 seeks optimal solutions for systems for energy conversion (solar fuels, CO2 harvesting, photocatalysis), to health (removal of volatile organic compounds from air streams), for biotechnology (plasma-driven biocatalysis), and for technical chemistry (bottom-up synthesis from small molecules to valuable chemicals).